Production growth has mainly come from the Marcellus and Utica shale plays in Ohio, West Virginia and Pennsylvania, the leaders of the shale revolution that shifted market dynamics over the past 10 years.   In January 2010, these two plays accounted for just 1.95 Bcf/d of production, or just 3.5 percent of the total U.S. output.   Production from the same region totaled more than 10 percent of production as of February 2012 and as of January 2017, the production from the plays had grown to 32.5 percent of domestic production.   As of October, more than a third of domestic dry gas production came out of the Marcellus and Utica shales.

With the growing reliance on these three states for the U.S. natural gas supply has come a surge in pipeline infrastructure projects needed to move the gas to market.  Some of these projects, such as the Rockies Express Pipeline (REX) East-to-West project, have converted pipes into bi-directional pathways for gas.  Traditionally natural gas flowed north from production fields in the southern U.S. and the Gulf or eastward from the Rocky Mountain Region.   With production shifting away from these regions and to the Appalachia, these pipelines no longer needed full pipeline capacity flowing in the “traditional” directions.  Instead, the pipelines were converted to be able to flow gas out of the Marcellus and Utica shales to markets south and west from these two plays. 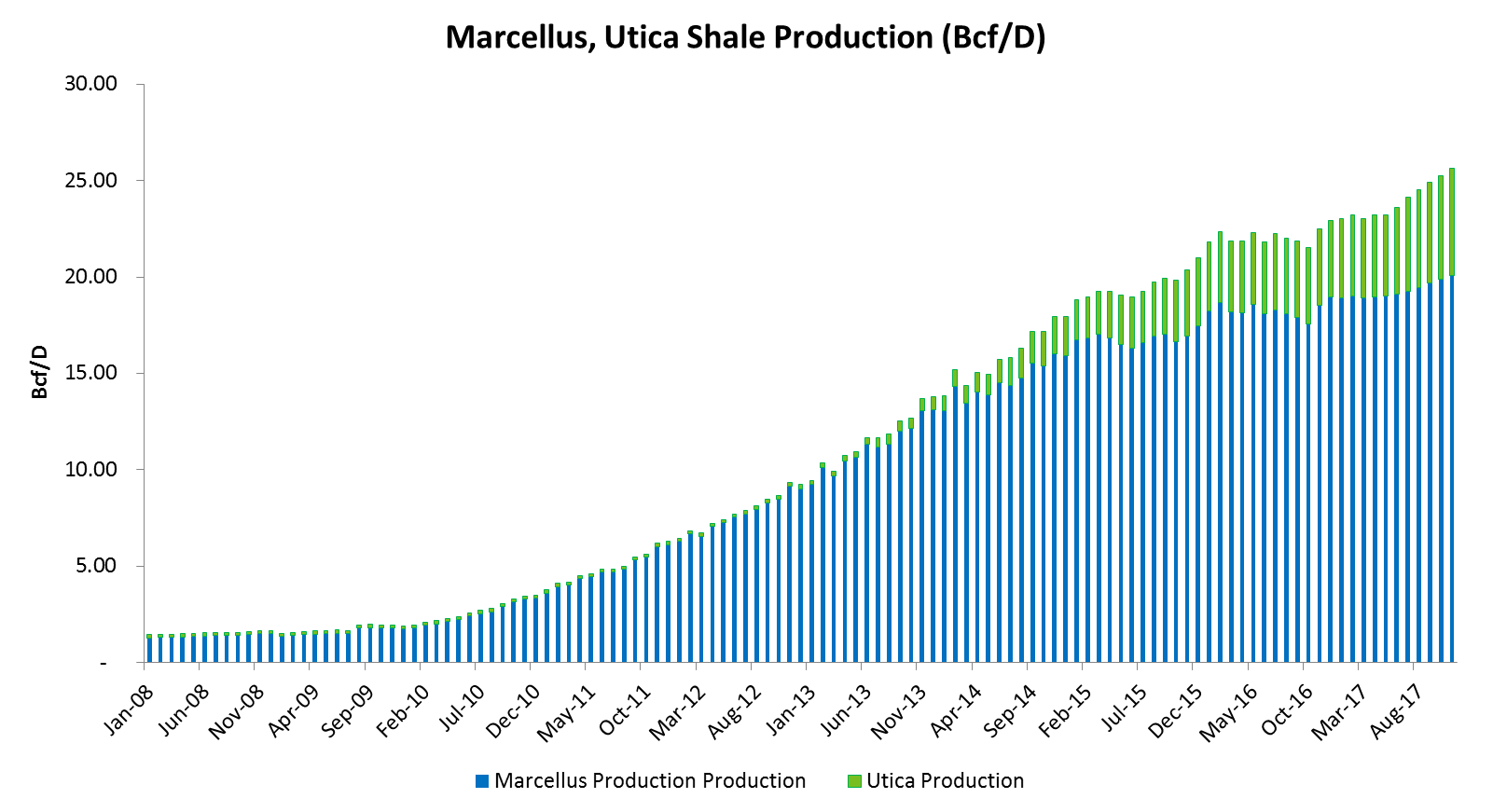 In addition, pipeline constraints along the Atlantic Coast, in New England and in the upper Midwest are leading to the construction of multiple new, or greenfield, pipeline systems.  One such project, the Rover Pipeline, was partially put into service this fall.   Approximately 1.0 Bcf/d of the total 3.25 Bcf/d of capacity is currently flowing on the pipeline.   The remaining capacity will be put into service in the first quarter of 2018.  Other projects, such as the Nexus Pipeline and the Atlantic Sunrise Pipeline, are currently under construction after receiving federal approval earlier in the year.

Regardless if the infrastructure project is a pipeline flow reversal or a new greenfield system altogether, all of these projects are aimed at getting production from the Marcellus and Utica shale plays to demand markets all across the country.   And as each project comes online, additional production will be needed to fill the new capacity.  Looking forward, the U.S. Energy Information Administration is forecasting production to grow to 77.4 Bcf/d by the end of 2017 and to 79.0 Bcf/d by the end of 2018.  And as domestic production continues to grow in the coming years, look for the Marcellus and Utica shales and the infrastructure projects connected to these two plays to lead the way.

Trane and the Circle Logo are trademarks of Trane in the United States and other countries.

For General and Corporate Questions: