How an Air Conditioner Works

When it’s a hot summer day outside, but a brisk 68 degrees in your home, you might find yourself wondering, “How do air conditioners work?” To sum it up, air conditioners remove heat and humidity from the air inside and place it outside to ultimately cool down your home.

To complete this process, a lot of different parts of the air conditioner need to work together. And let’s not forget that there are multiple types of systems that all fulfill the same goal of cooling your home. Let’s dive into the specifics, so you can understand how your air conditioner really works and discover which system is right for you.

Generally speaking, there are two categories of air conditioners: central cooling systems and ductless split systems. While both work to cool your home, these systems function in vastly different ways.

Because central cooling systems cool entire homes, the units take up more space than ductless systems (we’ll get to those in a second!). The smallest possible size for a central air conditioner is 1.5 tons. These kinds of units can reach up to 22 SEER, or Seasonal Energy Efficiency Ratio, which is a measure of how energy efficient an air conditioner is during the spring and summer months. Minimum SEER ratings in the United States are at least 14, according to the Department of Energy, so while central AC can cool your entire home, they’re not always the most energy-efficient option and can come with high energy costs.

When the ductless outdoor to indoor ratio is 1:1, it’s called a mini-split. When the ratio is any more than 1:1, it’s referred to as a multi-split. Because these units are designed to cool smaller spaces, they come in a small size, with the smallest being .75 tons. Ductless split systems can reach up to 33 SEER, making them a much more energy-efficient option than central cooling systems. Using them will likely save you money on your energy bill despite their higher initial costs. 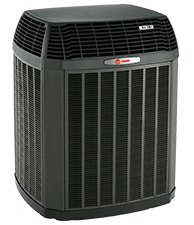 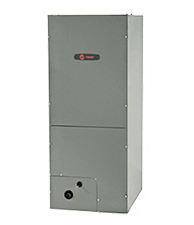 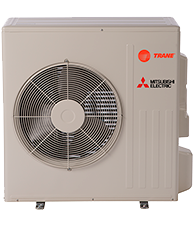 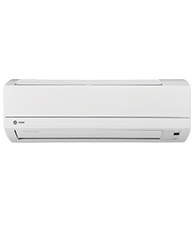 Understanding the different types of air conditioners will help you determine which is right for your home.

As we mentioned above, central heating and cooling systems, like central air conditioners, work by feeding air via ductwork through your home. Central air conditioners have both an indoor unit and an outdoor unit, and are one of the most common types of air conditioners. These units are great for homes with a basement or crawlspace because the indoor portion can be tucked away in an unused space.

Ductless units can be mounted on the floor or the wall. Wall-mounted air conditioners are normally installed higher up, so it takes longer to feel the effects of the cool air, but they’re better at evenly distributing air. Floor-mounted ACs make you feel the cool air quicker and they look more discreet, but airflow can be compromised.

Now that you know about all the different types of air conditioners, let’s look at the major parts that make them up.

Refrigerant is an essential part of an air conditioner — without it the entire system wouldn’t be able to function. This chemical cooling compound flows throughout the air conditioner, absorbing and releasing heat at different stages to cool down your home. The cooling process kicks off when a fan blows heated air from inside your home into the air conditioner, and the refrigerant absorbs that heat inside the evaporator coil.

The evaporator coil is the place for absorbing heat. When the fan blows hot air from your home over the cold evaporator coils, the cool liquid refrigerant inside absorbs the heat from the air completely, then continues on through the air conditioner.

When the refrigerant leaves the condenser coil, even though it releases most of its heat outside, it’s still too hot to re-enter the evaporator coil. So, the expansion valve works by decreasing the pressure of the refrigerant and cooling it back down even more. The expansion valve sends the cold refrigerant back into the evaporator coil, where it picks up more heat from the air inside your home and the process repeats itself.

How does central air work?

Central air conditioning works by moving around air in your home until it reaches your desired temperature. Central air systems pull hot air from your home, work to cool it down by releasing its heat outside, then distribute the newly-cooled air through a system of ducts in your home. That way, every room is reaching the ideal temperature.

How does ductless air conditioning work?

Does an air conditioner take in air from the outside?

Air conditioners can improve air quality. After heat and humidity are absorbed from the air inside your home, the air is filtered for dust, lint, and debris. The heat gets moved outside, but the air that remains and goes back into your home is cleaner than before, resulting in better air quality.

WANT TO SAVE ON A NEW SYSTEM?
NEED EMERGENCY REPAIRS?

Let us know how we can help and the top-rated Trane Comfort Specialist™ in your area will contact you shortly.

By pressing the “Submit” button, I consent to receive a phone call about products and services from a Trane Comfort Specialist™ at the phone number(s) provided. I understand these calls may be generated using automated technology and my consent does not imply or require that a purchase be made.

Need help? Answer a few questions to connect with a dealer who can help you find your best HVAC solution.

Tell us what you think

Please take a short survey about your experience on Trane.com.

How would you rate your overall
experience on trane.com?

Tell us what you think

Please take a short survey on what
you think about trane.com

Not In Service Area

The dealer you selected doesn't service your Zip/Postal code.

You can close and confirm your location on the form or view all dealers in your area.

Find dealers in your area

We recommend using the latest version of Google Chrome, Microsoft Edge, or Safari